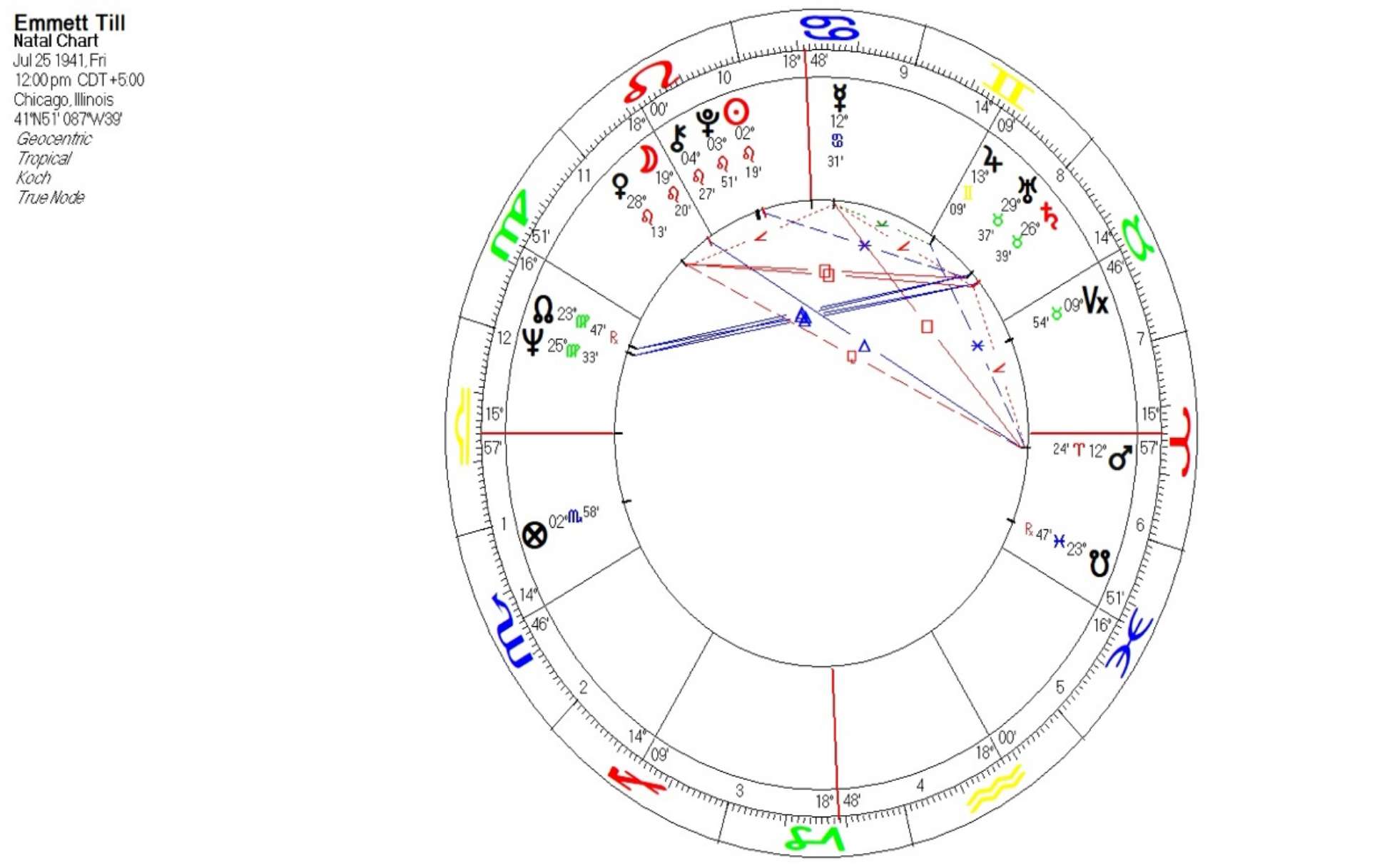 Emmett Till was born on July 25th, 1941, in Chicago, Illinois. An exact time is not known.

The birth process was long and difficult for his mother, Mamie. Emmett would be her only child.

Emmett’s father, Louis, seemed disinterested in his son’s birth. He never came to the hospital to see Mamie and Emmett. Louis finally separated from the family in 1942 and later joined the Army. He was executed by the Army for “willful misconduct” in 1945 in Italy. Emmett was almost four years old.

Fourteen years after his birth, Emmett died on August 28, 1955, at the hands of at least two, and maybe as many as seven men who tortured, beat, and finally shot him for whistling at a white woman. She also claimed that he had been physically inappropriate, but no one witnessed it.

This was a horrific experience for Emmett’s mother. She demanded that that experience be shared by everyone by having an open casket so all could see the evidence of his beating and torture.

Two of the men were tried and found “not guilty” by an all-white male jury saying that the state had failed to identify the body. The body was identified by Emmett’s mother and Uncle Moses without hesitation…. but then they were African Americans testifying before a white male jury in a segregated court room in a segregated state.

Who was Emmett Till? Friends described Emmett as a prankster and mimic. He liked to watch comedians on TV and mimic their sketches. Red Skelton was said to be a favorite. He also liked to play baseball in the neighborhood just for fun.

He loved being the center of things. But, of course, he did with Sun, Moon, Venus, and Pluto in the sign of Leo, a strong astrological stellium, a concentration of energy. Leonian energy likes to shine and create and perform. He was a social person, outgoing and happy. He especially loved being with his cousins who lived in his Chicago neighborhood and were also with him in Mississippi visiting family.

With the Sun conjunct Pluto Emmett would be a person who liked to be in charge. He was strong-willed and, eventually, might have developed leadership skills. His outgoing demeanor belied the intense inner energy. Given the chance to mature, he might have developed into a charismatic minister, a politician, or head of a non-profit or for-profit business serving the community…or even a comedian.

Saturn (security/stability) and Uranus (change/innovation) were conjunct (blended) in his natal chart which spoke to his inner tension and outer restlessness. This pairing of energies reflected his edginess and acting without thinking behavior which got him into trouble. In maturity he might have used the same energy to develop the ability to see many sides of an argument, both traditional and progressive views.

Neptune (illusion, spirituality, and creativity) flowed (trine aspect) easily with Saturn and Uranus. Emmett would have eventually understood that his dreams and ideals for his life would need honed by an understanding of reality and the development of discipline. Interestingly, stories about Emmett say he was already helping his mother with house cleaning and laundry in his teen years. He was developing responsibility. He liked to have clean and stylish clothes.

There was the potential for spiritual learning in the chart that could have led to becoming a minister or spiritual advisor. He was a people person and did love family and community. He went to church regularly with his mother and/or maternal grandmother. His Jupiter (higher learning and wisdom) was in the sign of Gemini (communication and connections) Jupiter was in a sextile (opportunities created) to Mars suggesting that a passion and fire for learning about life and religion (Jupiter) could develop as he matured.

Mercury semi-sextile (a question/thinking aspect) to Jupiter suggested that growing up Emmett would have to learn not to let his verbalizations (Mercury) get overextended or inappropriate (Jupiter). However, the pairing of Mercury and Jupiter also gives the possibility of greater education and developing wisdom.

Mercury energies out-of-control or misunderstood (square aspect) could lead to aggression (Mars) and miscommunications with others. Unfortunately, this is what happened. With maturing and guidance these same energy patterns could bring learning and understanding of non-violent communication methods to help people get along with each other and learn how to communicate differences. Such a skill set could have developed into a teaching career, or as a negotiator, or diplomat.

Mercury was also semi-square (challenged) to Saturn and Uranus reflecting his stutter, especially noticeable when he would get excited.

Emmett had a lot of potential and raw energy to be formed. He was not given a chance to mature or develop. He was fourteen and showing off in front of his cousins. He whistled at a white woman in Mississippi. He lost his life because of that whistle. We lost an interesting boy who was growing into a strong man who might have been able to help all of us understand racial tensions and come together in a cooperative understanding creating solutions on many levels. I think Emmett as a man would have helped us through serious discussions and dialogs with a smile on his face and an edge of fun in his heart.